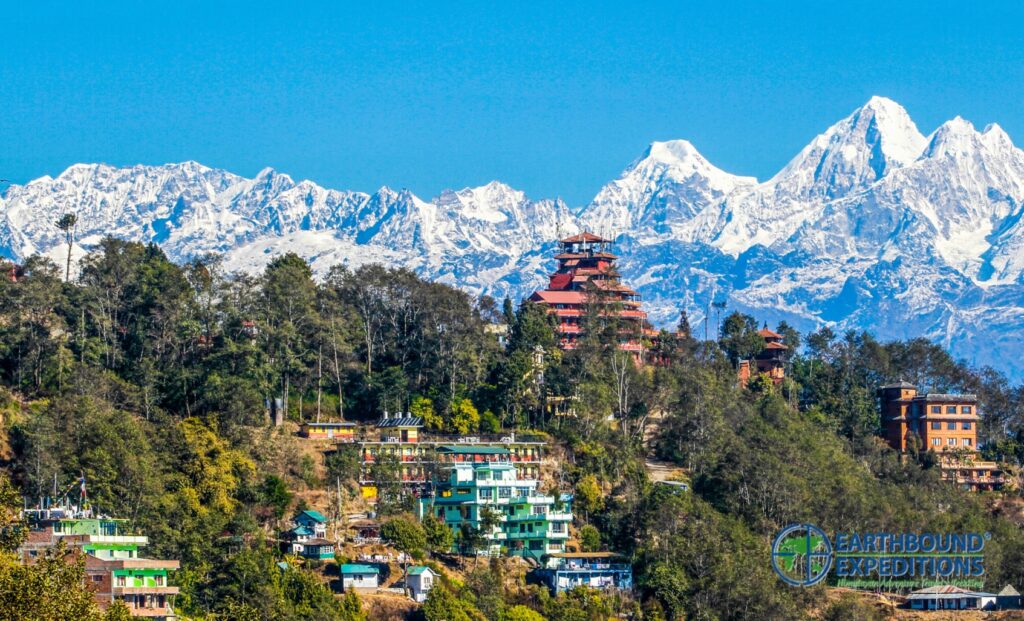 Location: Between India and the Tibetan autonomous region of the Republic of China
Area: 147,181 square kilometer
Capital: Kathmandu
Location: Situated between China in the north and India in the south, east and west
Population: 25.8 million
People: Nepal has more than 106 ethnic/caste groups and 100 spoken languages.
Language: Nepali is the national language; people involved in travel and trade understand and speak English too.
Religion: Nepal is a secular state with predominance of Hindu and Buddhist population.
Political System: Federal Democratic Republic
Climate: Nepal has four major seasons (1) winter: December-February, (2) spring: March-May, (3) summer: June-August, (4) autumn: September-November. Nepal can be visited the whole year round.

Arrival in Tribhuwan International Airport, Kathmandu. You will be warmly greeted and welcomed with “Khada” by our representative who will assist and transfer you towards Nagarkot which is at height of 2100m above sea level  which is about 32 KM away from the city of Kathmandu.  Upon arrival you will be briefed about your trip with us and necessary travel documents will be handed over to you by our assistance who will also help you in Check-In process to your Hotel.

Nagarkot (32km east of Kathmandu, 2100m above seal-level), this scenic spot, with a spectacular view of the sunset and

Mount Everest can be seen on a clear day. In the evening, enjoy the sunset of the Himalayan at Nagarkot. Nagarkot commands one of the broadest views of the Himalayas in the Kathmandu valley (8 Himalayan ranges of Nepal out of 13 from here). The ranges include Annapurna range, Manaslu range, Ganesh himal range, Langtang range, Jugal range, Rolwaling range, Mahalangur range (Everest range) and Numbur range with views of the Kathmandu valley and Shivapuri National Park.

For those active nature lovers and outdoor enthusiasts, there are lots of hiking opportunities to do in and around Nagarkot.

Among them, Nagarkot eco trail (nature walk) along with Nagarkot panoramic hiking trail is the most popular ones.

Morning Breakfast at Hotel.  If you desire, the hotel staff will wake you up early morning for sunrise view.

After breakfast, On the way back, proceed for the full day sightseeing tour of Bhaktapur Durbar Square, Holy Pashupatinath Temple & Bauddhanath Stupa.

Changu Narayan Temple: The hilltop temple of Changu Narayan, located 4 kilometers north of Bhaktapur, is the oldest Vishnu shrine in Kathmandu Valley. Founded as early as 325 AD, it is one of Nepal’s most beautiful and historically important structures. Reconstructed in 1702 following its destruction by fire, the two-storey temple has many intricate carvings of the ten incarnations of Vishnu and different multi-armed Tantric goddesses. Changu Narayan’s true gems, however, are the Lichhavai period (4th to 9th centuries) stone, wood, and metal carvings in the courtyard surrounding the main temple.

Apart from the main temple there are other shrines dedicated to Shiva, Chinna Masta (Kali), Ganesh and Krishna found in the courtyard. A pilgrimage to the temple of Chinna Masta, considered to be the mother goddess worshipped at the site in prehistoric times, is held here each year in the Nepali month of Baisaakh (April-May).

The Changu Narayan Temple is one of seven structures cited by UNESCO as demonstrating the historic and artistic achievements that make the Kathmandu Valley a World Heritage Site.

Bhaktapur Durbar Square:  This Square is an open museum holding exciting palace, courtyards, royal bath, sculptures, pagodas, Shikhara style temples and Buddhist monastery along with exclusive architecture. In other words, this is the most beautiful Durbar you visit in your Nepal tours. Though 1934 earthquake brought bad luck to its structure, still the remaining monuments are the finest examples of the medieval excellence. Just near the square, you will visit the traditional painting School, the dying art of Nepal which is the best souvenir from Nepal. Besides palace complex, five storied temple with most appreciated architecture, the Pottery Square, Dattatraya Square and Peacock window are some other things to see in Bhaktapur.

Pashupatinath Temple (3Km Northwest of Kathmandu) with its astonishing architectural beauty, stands as a symbol of faith, religion, culture and tradition. Pashupatinath is regarded as one of the most sacred temple of Hindu Lord Shiva in the world and its existence dates back to 400 A.D. The richly-ornamented pagoda houses the sacred linga or phallic symbol of Lord Shiva. Thousands of pilgrims from all over the world come to pay homage to this temple that is also known as ‘The Temple of Living Beings’. Only the Hindus are allowed to go inside the temple.

Boudhanath Stupa (6 km east of downtown Kathmandu) is the largest stupa in the Valley and one of the largest in the world. It looms 36 meters high and presents one of the most fascinating specimens of stupa design with hundreds of prayer wheels and 108 small images of Buddha all around. The stupa has four sides with the watchful eyes of Lord Buddha. All the Buddhists throng to this stupa to take part in the sacred rituals during the Buddhist festivals.

Overnight at Hotel – Kathmandu. [B]

Swayambhunath: Perched on a hilltop on the south western part of Kathmandu, Swayambhunath is one of the most important religious and cultural sites in Nepal and is associated with the birth of the Kathmandu Valley civilization. Approximately 2000 years old, Swayambhunath stupa, is a dome 20 meters in diameter and 32 meters high and is made of brick and earth mounted by a conical spire capped by a pinnacle of copper gilt. It is surrounded by many other smaller temples and places of religious importance for both Hindus and Buddhists, a perfect example of the symbiotic co-existence of different religious beliefs only found in Nepal. The hill is heavily wooded on all sides with indigenous plant species, and troops of monkeys, giving it the nick name of Monkey Temple.

Kathmandu City: Kathmandu Valley, the capital and heart of the country essentially symbolizes all that is Nepal. Katmandu Durbar Square where you will visit Hanuman Dhoka, the old and historic palace of Kathmandu named after monkey God, Hanuman. It is historic seat of royalty. Within the walking distance you will find the tall temple of Taleju from 1549 AD, the large stone statue of Kal Bhairav, the God of destruction. The Big Bell and Big Drum and Hindu Lord Shiva and his consort Parvati peeping from window. Visit the temple of Kumari, the residence of Living Goddess within the vicinity. Kumari means the virgin girl. The girl is selected from Buddhist family. The building has profusely carved wooden balconies and window screen. Next a very interesting temple is Kasthamandap which is believed to be built from a single tree trunk and the name Katmandu is derived from this temple.

Patan City: The city lies about 5 kms from the Kathmandu. It is a city of Buddhist monuments, Hindu temples and fine wood carvings. Lalitpur is another name of this city which ‘means the city of beauty’. The city is known as the paradise of fine arts.  Patan durbar square located in Patan and is World Heritage Site a Patan Durbar has many famous sites and unique architectures. Krishna Mandi, Bhimsen temple, Hiranya Varna Mahabhihar are just a few among the temples offering you an ecstasy of paintings, wood and metal carvings. The Sundari Chowk contains exquisite samples of. woodcarvings, stone and metal sculpture. Patan Dubar Square and the Himalaya that can be seen at a distance make an enchanting scene.

Morning breakfast at hotel. After sometime you will proceed towards full day sightseeing of Kirtipur (ancient city of Kathmandu) following Chovar and Dakshinkali Temple.

Dakshinkali Temple: Dakshinkali Temple is one of the most famous and popular Hindu shrine dedicated to Goddess Kali, “The Black One”. It is located 22km outside Kathmandu Valley and 1 km outside the village of Pharping. The road to DakshinKali is in a good condition but it is uphill all the way. If you plan to go on the Mountain Bike, it is really a interesting place to go and coming back fast is the fun park. Dakshinkali is about a 45-minute taxi ride from Kathmandu. You can hire a taxi and pay a little bit more to the taxi driver to wait while you explore other sites.

It is said that DAKSINKALI came to an existence after goddess KALI herself appeared in the dream of a Malla king, the ruler of 14th century. Goddess kali then commanded the king to build a temple dedicating her in a very unknown strange place. As the command was about to be followed immediately, a person said that he had already sort out a stone image of the goddess kali in the same place where goddess  kali commanded the king to built the temple. The image was then left open with the elements as she commanded over her head a gilded canopy was kept erect with four golden serpents. Also images of lord Ganesh , seven  Asthamatrikas and a stone Bhairav nearby her images.

Kirtipur: Just 5km southwest of Kathmandu, the sleepy town of Kirtipur has a wonderful sense of faded grandeur thanks to the impressive medieval temples dotted around its backstreets. When Prithvi Narayan Shah stormed into the valley in 1768, he made a priority of capturing Kirtipur to provide a base for his crushing attacks on the Malla kingdoms. Kirtipur’s resistance was strong, but eventually, after a bitter siege, the town was taken. The inhabitants paid a terrible price for their brave resistance – the king ordered that the nose and lips be cut off every male inhabitant in the town, sparing only those who could play wind instruments for his entertainment.

Pharping/Chovar: The small picturesque village of Chobhar overlooking the Bagmati River is just a kilometer beyond Kirtipur. The Chobhar Gorge below is the greater attraction. Alongside is the Jal Vinayak Temple, an important pilgrimage site for the valley residents. Legend has it that the gorge was carved out by a mighty blow of the sword by Manjushree who wanted to drain the lake that filled Kathmandu Valley in ancient times. Even today, the Valley’s waters gush out to the plains beyond the hills through this place.

Breakfast at Hotel. Our representative will meet you on time at your hotel and help you through Check-out. You will be transferred on time to Tribhuwan International Airport, Kathmandu for your departure process.